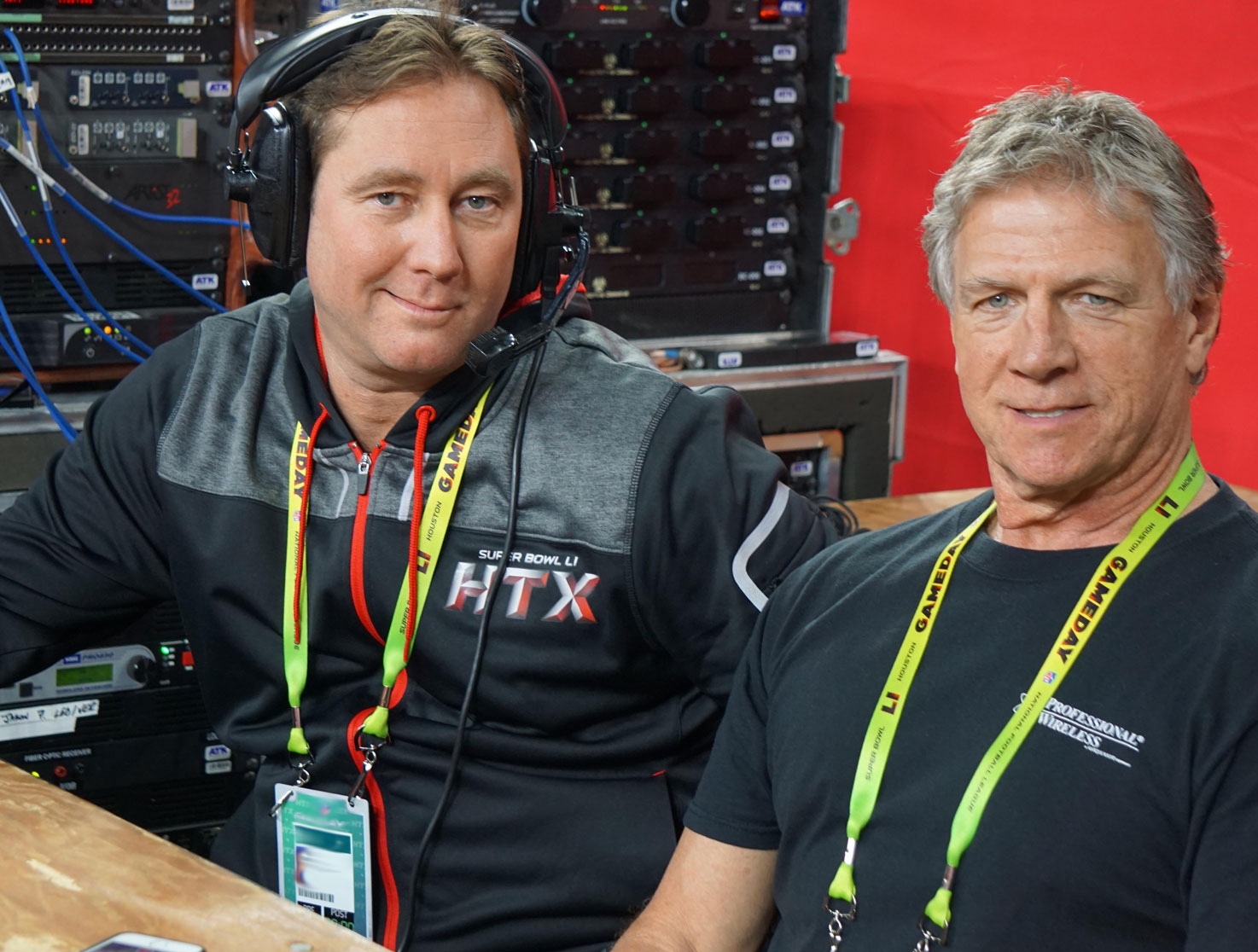 When one of the world’s most popular pop stars plans on jumping from the roof of the stadium during the half-time performance of the Super Bowl, you can rest assured that rock-solid communication is of utmost importance. Fortunately, ATK Versacom’s production team was equipped with Radio Active Designs UV-1G wireless intercoms and the event went off without a hitch.

Jeff Watson, ATK Versacom’s RF PL Engineer for Super Bowl 51, managed pre-game, anthem, halftime show and the Lombardi Award presentation with the assistance of five UV-1G base stations with 30 RAD bodypacks which were in use by stage managers, audio, lighting and members of Flying By Foy, the widely-respected theatrical flying service that was responsible for the flying portion of Lady Gaga’s performance.

“Because of the UV-1G’s bandwidth efficiency and open RF spectrum in the VHF range, I could give each user of the RAD systems full duplex communication, unlike the users of my other UHF FM systems – which were all pseudo-simplex,” Watson explains. “Due to the UHF spectrum being so saturated, all four users of each UHF FM system are “stacked” on the same frequency, so only one person can speak at a time or they cancel each other out. We didn’t have to do this with the RAD units, so those users had full two-way communication throughout the event. The half-time show had a lot of moving parts – literally and figuratively. It is extremely important that some team members be able to communicate with others no matter what. The RAD systems allow us to accomplish that.”

Radio Active Designs UV-1G Enhanced Narrow Band technology is 10 times more spectrally efficient than current FM technology. As a result, the UV-1G offers RF channels possessing an occupied bandwidth of a mere 25 kHz the audio characteristics one would expect from a traditional FM system. In addition, the system utilizes the relatively unused VHF range for all belt pack portable devices, leaving more room for operation of other wireless devices, such as wireless microphones and in-ear monitors, which were in use during the event.

Watson, who had also used RAD systems during last year’s Super Bowl, adds, “Last year RAD provided significant improvements to the audio quality of their RAD Pack and this year they did it again. We used four new body pack prototypes that improved the audio quality even more. I was extremely impressed. With the radio spectrum auction taking away chunks of bandwidth, RAD UV-1G’s are going to be the only system out there that will work on events of this size in the future.”

ATK Versacom also provided RAD TX-8’s for Transmit Combining and the new UHF/VHF DB-IC for receivers along with an ATK Versacom proprietary RF over fiber system. In addition, Radio Active Designs VF-1 VHF paddle antennas were also in use making is possible to cover the entire field with just one receiver antenna. A remote antenna was used in the tunnels for continuous coverage throughout the entire venue.

“It was an incredible system that worked extremely well,” Watson concludes. “The RAD system makes coordinating an event of this magnitude much easier than it has ever been before.”